A+ A A-
Draza Mihailovic Cup 2021 Wollongong

Below is some basic information about DMC22 !
Registration for the upcomingDraza Mihailovic Cup (DMC), which will be held inWollongong (NSW), is now open!
Event Timing: Saturday 24th December 2022 (Day 1) & Monday 26th December 2022 (Day 2)
Event Address: The Snakepit,Foley Street, Gwynneville, NSW 2500
Please follow the below link to submit your registration.
https://forms.gle/fWX7eoHPTLKtzjmC6
The following Categories will be contested during the tournament (subject to change)
REGISTRATION CLOSES Sunday 11th December 2022(no further entries will be accepted after this date)
·        The Welcoming Party will be on the evening of 23 December at the St Jovan Church in Kenny Street (downtown Wollongong).
·        Trophy/Medal Presentation Event at the St Jovan Church Hall in Dapto (some 10-15mins south of Wollongong) on the evening of 26 December.
·        25 December will be a free day and we’d encourage our interstate visitors to enjoy the amazing Beaches of Wollongong 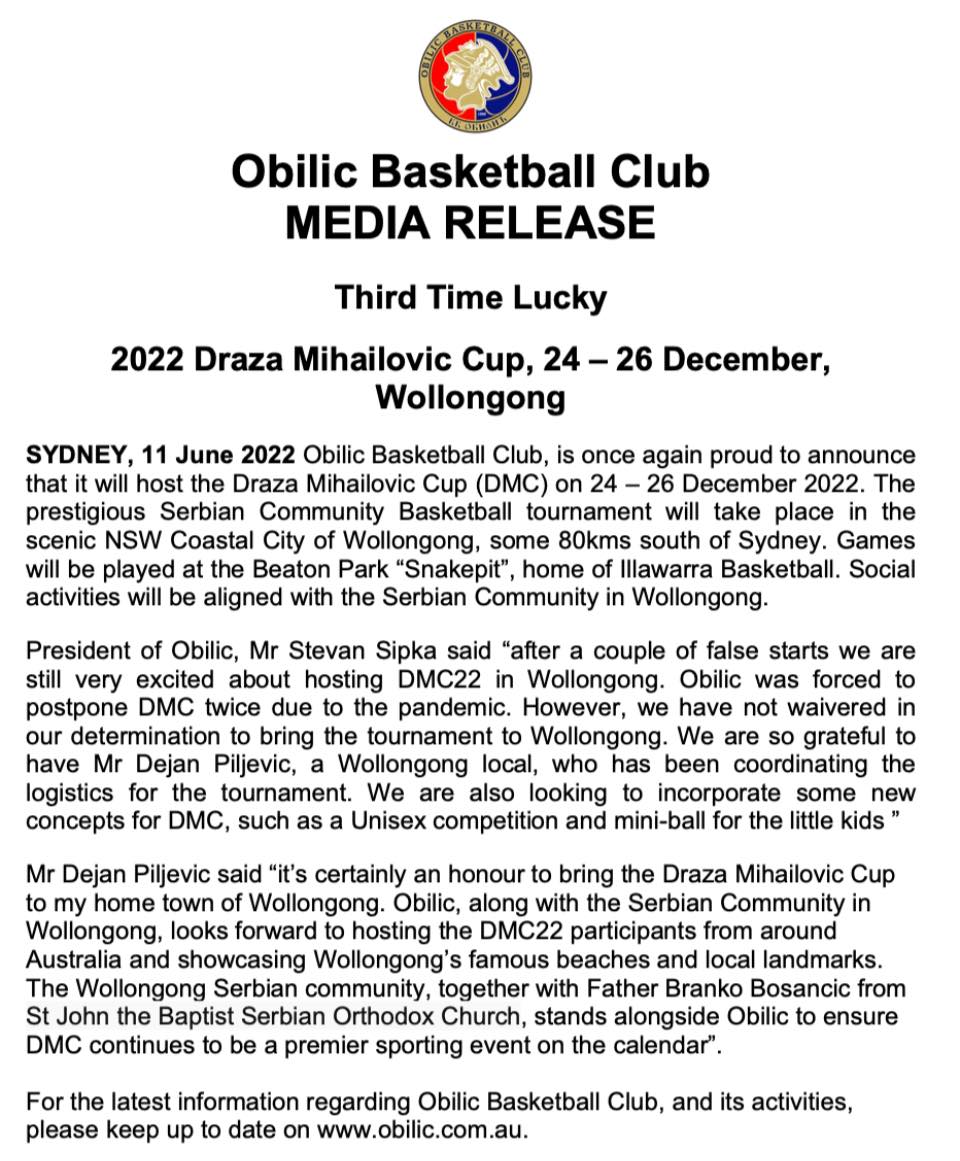 OPEN DAY: 23rd December (St.John the Baptist Serbian Orthodox Church,82 Kenny St, Wollongong NSW 2500)
Day 1 Games – 24th December
Day 2 Rest Day – 25th December
Day 3 Games – 26th December
ADDRESS: “The Snakepit Stadium” (37 Foley St, Gwynneville NSW 2500)
DRAZA MIHAILOVIC CUP | OFFICIAL WEBSITE |
The Draza Mihailovic Cup is a very special competition, this competition bring the best Serbian basketball teams together once a year.
Competitors that compete every year in this tournament are clubs and teams from Sydney, Melbourne, Adelaide, Brisbane, Perth and Canberra.
Beginning in 1993 the tournament has been held annually and is one of the major sporting events in the Serbian-Australian Diaspora calendar.
This tournament is one of the biggest sporting events in the Serbian community and as such is very significant for the entire Serbian community of Serbs in Australia because the tournament brings together teams and players from all over Australia, which in addition to promoting the sport of basketball I also promote the importance of sport and a healthy lifestyle among young people who live here in Australia.
Red Stars Basketball Club hosted 24th Draza Mihailovic Cup in 2016 for the first time.
Red Stars Basketball Club competed for the first time at DMC in 2008 in Sydney. Since then Red Stars are regular competitors at the tournament.
All of the Red Stars Basketball Club teams achievements throughout the eight years of competition at DMC tournament can be seen on our website www.bcredstars.com
If you are a Serbian basketball team in Tasmania, ACT, Northern Territory or New Zealand You are more than welcome to attend the Draza Mihailovic Cup. This is open to Men's, Women's, Junior Boys and Girls teams.
The competition will have multiple divisions in Men's, Women's and Junior categories.
Last modified on
Rate this item
(0 votes)
Read 4243 times
Published in DMC_sec
Tweet

More in this category: « Draza Mihailovic Cup 2019 Brisbane
back to top